The History of the Lyke Wake Walk

The man behind the inception of the Lyke Wake Walk, was called Bill Cowley. Bill was a former Indian Civil Servant, North Yorkshire farmer, local historian, journalist and broadcaster.

In August 1955, he wrote an article, published in the Dalesman, suggesting the possibility of walking the 67km expanse of the North Yorkshire Moors National Park in less than 24 hours.

The North Yorkshire Moors National Park, located in the north east corner of North Yorkshire, is Englands largest expanse of heather moorland. The idea of walking this area and distance within 24 hours had never been put forward before.

On the 1st October 1955, Bill Cowley and twelve others, set out to complete this challenge, and succeeded - finishing at the Raven Hall Hotel in Ravenscar within the alloted time frame. The group promptly founded the now famous 'Lyke Wake Club', and the Lyke Wake Walk became one of the country's first 'challenge' walks.

In the fifty years that followed, it is thought over 160,000 people walked the Lyke Wake Walk - and during the peak of its popularity in the 60's and 70's as many as 15,000 walkers a year were completing the challenge. During these times, through the weekends of May and June, it was not unusual to find thousands of walkers on the moors, many doing it for charity and overall thousands of pounds have been raised for a wealth of different charitable organisations over the years. 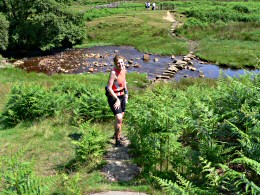 The volume of walkers however, started to have an impact on the surrounding land, and unfortunate damage started to occur to the delicate and fragile moorland ecology.

The Lyke Wake Club, worked very closely with landowners and the National Park Authorities to try to alleviate this problem, and as such two new walks -the Hambleton Hobble and the Shepherd's Round were devised as alternative routes and to spread the load over the wider area.

In 1973, the Lyke Wake Club, formed a limited company - the Lyke Wake Company Ltd (registered in England 1118972), which put in place legal measures to protect the intellectual property rights of the founder and of the former club.

However as gradually more challenge walks became available to walkers, the popularity of the Lyke Wake Walk lessened. Its founding member, Bill Cowley died in 1994, and following the agreement of the family of Bill Cowley and the majority of club members and offcials, on the 1st October 2005 a final 'Golden Jubilee Wake' was held and the Lyke Wake Club was laid to rest, at the Raven Hall Hotel - fifty years to the day from where it had all started.

The formal records of the club are now held at the County Records Office in Northallerton, and less formal materials, photographic archive, press cuttings etc are held at the Ryedale Folk Museum at Hutton-le-Hole.

The Lyke Wake Walk continues to attract a very limited number of people, however, some people still complete this challenge. Fortunately this reduction enabled the serious ecological moorland damage to recover. Due to these very limited numbers, which caused the former club to cease in October 2005, it has become unviable to maintain the limited company, this is to be closed on 31st October 2019. The intellectual property rights of the club/company are still protected as registered trade-marks and designs.

The Lyke Wake Walk no longer require people who have completed the walk to send reports of the crossings. We are still interested though for statistical reasons, and official merchandise is still available. We still work closely with the National Park Authority with regards to the conservation of the moorland.

There is no question of closing the Lyke Wake Walk, except during times of great fire risk.